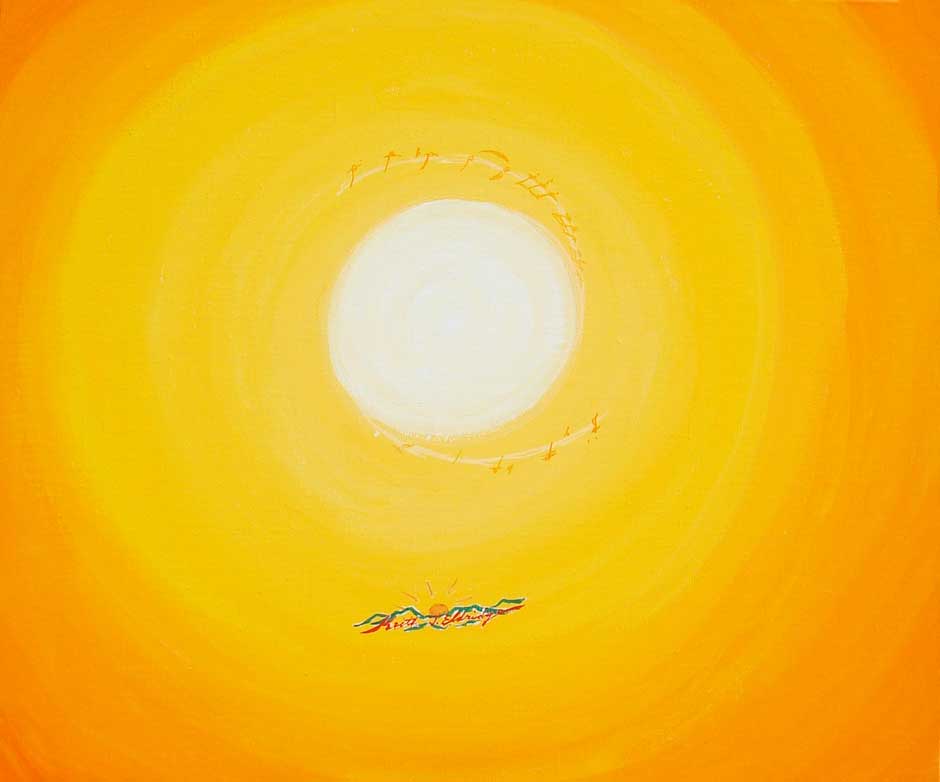 This design was created for the souls of people who were injured or killed as victims of atomic bombs, nuclear testing, or any form of radiation poisoning. They may or may not have known what was about to happen when the bomb ignited. Even if they realized that they were about to die, they had no time to prepare themselves. Those whose lost their lives instantly and had no idea that they were about to die may not realize what has happened. Some may even think that they are still alive, but can’t understand why everything’s different now. Their soul gets lost between our world and the light. My hope in creating this “Pure Light” healing art is that the energy in this painting will guide their spirit into the light (heaven).

I dreamt of a nuclear explosion, with a green tint in the sky representing radiation. The air itself seemed to fry as I felt the shock wave coming. I saw fireballs shoot up into the sky as souls were immediately taken in the blast. And the spirits – lost, confused and suffering – were coming toward me looking for help and guidance. I woke up and the suffering feeling stuck with me so much that I couldn’t get back to sleep. I hope this painting finds those souls so they can rest easy. Ever since I was a child, I’d had dreams and visions of nuclear explosions and they terrified me. I would often wake up screaming. After I began painting spiritual art, I created “Defuse”, to send the message to the world to stop Nuclear / Atomic bomb testing. The dreams subsided for a while, but in 2010 as the anniversaries of the atomic bombings of Hiroshima (Aug 6th) and Nagasaki (Aug 15) during World War II approached, the dream came about. I realized that the first painting was only the first step. Now I had to help the souls that were lost to find peace and move on. After I painted this, the dreams of nuclear bombs have stopped. I truly hope that means that the souls that were lost have found some peace.


This is spiritual healing art to bring pure light to victims and survivors of atomic and nuclear bombs or radiation testing so they move forward in their spiritual progression.
l

The Japanese term for those affected by nuclear explosions is “Hibakusha”. This includes people from any nationality. You can read more about Hibakusha on the wikipedia page here.
